Have you ever wondered what happens down at mission control? Who supports astronauts from below? Jay Trimble leads the User Centered Technology Group at NASA Ames Research Center (NASA-Ames Website). The UCT Group is a collection of people with various specialties from  anthropology to computer science that work together to create software for mission control. Jay also led another team called Mars Exploration Rover Human Centered Computing Project, which worked on Mar Rover Operations. Read the following interview with Jay Trimble to find out more about mission control. 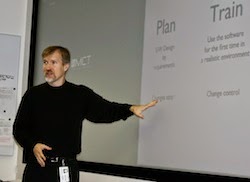 1. What are some of the projects that the User Centered Technology (UCT) Group at NASA Ames Research Center has worked on?
The UCT Group has focused on component software that allows users to build their own software with compositions, meaning users can essentially assemble their own software using drag and drop. The software is open source, it’s called Open Mission Control Technologies. You can learn more about the software at http://ti.arc.nasa.gov/OpenMCT/, or on GitHub at https://github.com/nasa/mct. The UCT group has also built software to assist scientist in archiving planetary science data.

2. What is the process of making software at the UCT Group like?
The process for making software is focused on the users. We use a range of methods to connect with users and translate what we’ve learned into the design of the software. We observe users doing their work in their own environment. This is important because observing users gives you a perspective that you won’t get by talking to them, though talking to users is also important. We interview users as well to better understand their work. We develop prototypes and iteratively improve them. Ideas are communicated and tested visually before committing to code.

3. How did the Mars Exploration Rover Human Centered Computing Project improve the process and technology of Mars Rover Operations?
For Mars Rover Operations we worked with the Jet Propulsion Lab (JPL). We were part of a team looking at science processes. We developed software that ran on large touch screens that allowed the scientists to plan several days out what they wanted to be doing.

5. What do you see in the future of the UCT Group, and space-related technology in general?
That’s a very broad question. My group is working on a Lunar Rover Mission to conduct surface exploration in polar regions to prospect for water and other resources. That’s our focus at the moment. We are also continuing to work with JPL on software for monitoring solar system exploration spacecraft. I think space technology in general in focused on moving us beyond low Earth orbit and out into the solar system.

6. How did you decide your career path?
I decided my career path based on my interest in the space program that began in grade school when we were landing on the Moon.

Come to the Marin Science Seminar on Wednesday May 21 at Terra Linda High School, San Rafael; Physiology Lab 207 from 7:30-8:30 to learn more