Can an animal still be a good scientist without thumbs? The answer is yes, because the sea lion is in this exact situation. Although sea lions have no thumbs, they have a big brain. Their brain is about the same size as a chimpanzee brain. They are one of the few mammals besides dolphins, humans, elephants, and whales that have brains that weigh more than 1.51Lbs. Scientists are not sure why the sea lion has such a big brain, but they think that it might be because they have a large body size and those two usually correspond. Other theories have to do with the weightlessness of the marine environment, coping with cold water temperature, or perhaps it is just a random outcome of evolution.
The sea lion’s brain consists of different regions for processing information from their whiskers. A specific, corresponding, area in the brainstem is devoted to each whisker on the sea lion’s nose. The areas in their brain that are responsible for processing touch information from the whiskers and the skin are the thalamus, cortex, and brainstem. Likewise, the human brain has specific areas which correspond to the individual fingers of a person. The whiskers on the sea lion assist with sea lion behavior and sensation. There are certain areas in the sea lion’s brain which are made for processing touch sensations from their flappers and tail. Scientists don’t know a lot about the sea lions cerebral skills. The sea lion has a particular part of their brain called the Bischoff’s Nucleus, which is very well-developed. It is surprising that sea lions have this part of their brain because it is usually found in animals with prominent tails such as kangaroos, raccoons, and whales. But the sea lion’s tail is tucked and small behind its hind flippers.
On each side of a sea lion’s face, are 38 whiskers. The whiskers can grow to be eight inches in length and are really sensitive. The sea lion produces more nerve fibers than any other animal in the animal kingdom. Its whiskers can be helpful in many ways too. One way is that they use their whiskers is to spot a fish by looking for changes in the flow of the water. They can find fish that are swimming up to 590 feet away from them. The whiskers can also help a sea lion know the differences between shapes and sizes up to as far as a fraction of a centimeter.
Amazingly, the sea lion’s brain is capable of higher cognitive functioning. A sea lion can play a game of Concentration. Through trial and error, they can match unrelated symbol pairs. They can also recognize signals, which is really useful in the wild. In this way they can find food, and know if someone is their friend or their enemy. Sea lions also have the ability to think logically. The can know that if a=b and b=c, then a=c.
To learn more about why sea lions are such good scientists, come to the Marin Science Seminar at Terra Linda High School in room 207 on Wednesday, February 8, 2017. Claire Simeone DVM of the Marine Mammal Center in Sausalito will be speaking. Join us and learn! 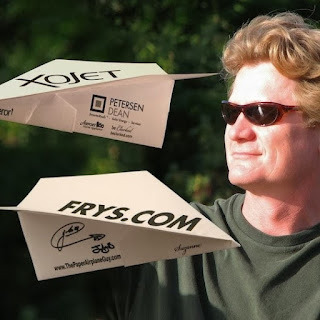 Inside a hanger at McClellan Airfield, a crowd gathered to watch an attempt to break the World Record in paper aircraft distance. Following a throw, the airplane began to climb into the air. Halfway across the hanger, the paper aircraft stalled briefly, beginning a glide towards the concrete floor below. Approaching the ground, the plane pulled out and sailed across a white line. In those nine seconds, the World Record for Paper Aircraft Distance was broken.

John Collins, the maker of that record-breaking paper airplane, has been designing paper planes for years. He has written books and appeared on many television programs, including the Tonight Show with Conan O'Brien. On January 11th, 2017, John Collins gave a talk at Marin Science Seminar about aerodynamics and paper airplane design.

Following his talk, we interviewed Mr. Collins about his profession and his design process.

1. How did you first become interested in making and paper airplanes?

I just never got out of paper airplanes.  Most people get over it a few months after getting into it.  I started with planes, moved into origami, and then took all of those folding tricks back to paper airplanes.
2. How many attempts did you make in order to achieve the World Record for Paper Airplane Distance? How did these earlier attempts influence later attempts and designs?

Countless.  I worked on it for 3 years.  Joe (the thrower) was with me for the last 18 months.  We went through Moffett Field, Mojave, and finally succeeded in McClellan Airfield.  We started out with a ballistic style dart, but Joe couldn't beat the old world record with that kind of plane.  We switched to a glider strategy, and immediately knew we were on the right track.  It took a lot of tinkering with the design and taping scheme to come up with the winning plane.  The folding pattern ended up being my very first try with A4 paper three years before.
3. How has the Maker Movement influenced you and/or your design process?

It was inspirational to be sure.  They asked me to participate in the very first Maker Faire in San Mateo, 13 years ago.  I've been part of every one since.  My first book was published 13 years before that first Maker Faire, so perhaps we influenced each other.  My design process hasn't really changed, but it's been fun interacting with high end tinkerers.
4. What are the best parts of your job? What are the worst?

Easy; the best part is the audience reaction.  When kids light up and start asking questions, it makes it all worthwhile.  Every once in a while, I have to fold hundreds of the same kind of plane for an event.  That's a bit tedious, but I put on some music, find my comfortable work chair, lay out the paper and get to work.  I count the sheets of paper before I start making the planes.  When I make it to the bottom of the stack, I'm finished.
5. What advice would you give to makers or students who wish to become makers?

Find something you enjoy and follow it.  Don't be afraid to change paths, even more than once.  I started in planes, moved to origami, and then discovered my real passion was taking one technology and throwing it at the other.  If you're going to be the best at anything, you have to love it.  Nobody can force you (at least in this country) to give up food, sleep, or being with friends to accomplish a big goal.  You can't really compete with someone who's willing to do that.  You have to be that passionate about your craft.  That passion is self-imposed; it comes from deep inside.  External forces will try to resist it.

Video Footage of the seminar will be available on Vimeo*. The Spring 2017 Schedule can be accessed here.

*Please note that it takes some time for footage to be processed and uploaded. A link will be added to this page when the video has been uploaded
By Zack Griggy at January 12, 2017 No comments: