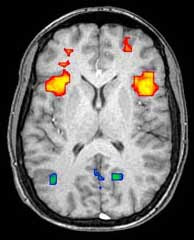 A fMRI scan of the human brain. This method of scanning the brain shows both function (activity shown in color) and tissues of the brain, and requires no radioactive substances to scan.
(source)

Irina Rabkina, an undergraduate neuroscience major and next speaker, graciously answered some questions about the broad field of neuroscience. Rabkina is a Terra Linda alumna who has gone on to study at Scripps College. She does research at the Center for Neuroeconomic Studies with Dr. Paul Zak.

The human brain is complex, and so is the study of it. Though Rabkina explains everything from decision-making to the structure of the human brain, neuroeconomics—and the puzzling presence of underwear in her upcoming lecture—still remains a mystery that, as Rabkina put it, 'you'll have to come to my talk to find out!'

In general, what is the field of neuroscience?

The most simple definition of neuroscience, in my opinion, is that it is the study of the nervous system--the brain, the spinal cord, nerves, etc. That's a broad definition, but it's a broad field.

Narrowing it down, what are you currently researching?

This is a harder question to answer. I'm still an undergrad, so I research whatever my advisors will let me. At CNS, Dr. Zak researches neuroeconomics. My Scripps advisor, Dr. Michael Spezio, works in the field of social neuroscience and I have a grant to work with him next semester.

In general, what are the different parts of the brain and their function?

At the most basic level, the brain is divided into the cerebrum, the cerebellum, the limbic system (thalamus, hypothalamus, amygdala, hippocampus), and the brain stem (midbrain, pons, medulla).
The cerebrum is what most people think of when they think of the brain--it's the part that looks like a walnut half and is divided into two hemispheres. It is responsible for higher brain function. The different lobes of the cerebrum (and the gyri and sulci within them) all have different associated functions. For example, one of the functions of the frontal lobe is planning. The cerebrum is considered to have evolved later than the other regions.   The cerebellum is also divided into two hemispheres. It is responsible for things like balance, posture, and coordination of movement.    The limbic system performs a range of functions such as memory, sensorimotor control, emotion, etc. Different parts of the limbic system are responsible for these varying functions, just like the different lobes in the cerebellum.   The brain stem is considered the oldest part of the brain from an evolutionary standpoint. It is involved in regulation of breathing and heartbeat, along with vision, audition, motor control, etc. Again, different parts are responsible for different functions.


What is the brain made of?

The two main types of cells in the brain are called neurons and glial cells. Neurons are the cells that carry electrical signals. They use these signals to 'communicate' with each other and other cells in the body in order to perform the functions that the nervous system is responsible for. Glial cells, on the other hand, support neurons. Their functions include insulating and protecting neurons. 'Glial' means 'glue' in Greek--for a long time, we thought that gluing neurons together was all that glial cells did. Obviously, we now know that this is not the case.

A labelled diagram of the human brain.
(source)

What goes on in our brain when we make decisions?

A lot goes on in the brain when we make decisions. On a cognitive level, we essentially weigh positives and negatives of choices. On a molecular level, hormones like oxytocin and dopamine play a role. Then, of course, there are the neurons firing.
Clarification: oxytocin and dopamine are just two of the many hormones that play a role in decision making. I think that going into all of them and their functions would be too much (especially since we don't really know exactly what most of them do)

You'll have to come to my talk to find out! But really, it's taking neuroscience techniques and applying them to economics.


Is it true that people can't make truly logical, rational decisions before they turn 21? Why/why not?

Yes and no. Our frontal lobes don't finish developing until our mid 20s. That doesn't mean that decisions made before then are necessarily uninformed or irrational... just less so than they would be after we have finished developing.

Could you give some examples of research being done in the field of neuroscience? How do neuroscientists study the brain?

Like I said before, neuroscience is a very broad field. Just in Claremont, there's a professor doing research in vocalization in zebra finches, another doing work in nerve response in crayfish, not to mention Drs. Zak and Spezio. And those are just professors I have taken classes with. There are, of course, researchers inside and outside of Claremont doing work in other facets of neuroscience. Depending on the subfield, different techniques are used. So Dr. Zak mostly uses information that cones from analyzing the blood; Dr. Spezio tends to use EEG and fMRI; animal researchers use those animals; etc.

In your opinion, what is the most exciting part of neuroscience?

I find how little we truly know about the brain exciting. This is a field that has been around for a long time, but the technology is just now getting to a point where we can reliably use it for research into the human brain. I also find the concept of a brain studying brains awesome.

How did you come to know and pursue your field?

I actually found my interest in neuroscience through Marin Science Seminar. I attended a presentation by Dr. Ray Swanson of UCSF that I really enjoyed. I stayed to chat with him after his talk, and that turned into a summer internship which helped me realize just how much there is to learn about the brain and how cool it truly is.