Controversy over abortion laws has led to many other discussions surrounding the development of the fetus. When does a fetus begin to feel pain? When does it gain consciousness? What are its cognitive abilities in the womb? This essay will attempt to answer these questions.
It is still unclear when human babies/fetuses begin to feel pain. The first step to feeling pain is to develop the necessary neuroanatomy. Evidence suggests that the necessary anatomical developments are in place at as early as 26 weeks gestation. When a fetus of approximately 26 weeks is exposed to noxious stimuli, it will respond to them, although minimally (Derbyshire, 2006). There are studies which claim to record evidence of fetal expressions of pain and/or distress. In one particular study, 8 female and 7 male fetuses were scanned with a 4-D ultrasound four times during the second and third trimesters of pregnancy, or 24 to 36 weeks gestation. The study specifically focused on expressions of pain or distress. Researchers concluded that as the fetus matured, so too did its visible responses to stimuli. However, the fetuses were not provoked in any way, and these responses did not reflect the fetuses' emotional or cognitive state (Reissland, 2013).
Although fetuses technically have the anatomy to experience pain around 26 weeks gestation, it is unclear whether or not they actually experience pain as we know it, because of their minimal level of consciousness. Pain is defined as “an unpleasant sensory and emotional experience associated with actual or potential tissue damage, or described in terms of such damage” by the International Association for the Study of Pain. In spite of its anatomy, it is thought that fetuses do not experience true pain, because they are not conscious of it, and have no experience or memory to base their pain on. The fetus is actually provided natural sedatives from the placenta just as it receives nutrients from it. The fetus is asleep for the duration of gestation. It is suspended in a warm, cushioned environment and it does not know anything but this. It is unlikely that it would be able to experience true pain, as it is unconscious and has no basis for comparison. Essentially, the fetus has not yet learned how to experience pain, or identify itself as an individual (Koch, 2009).
In conclusion, it is unclear exactly when the fetus reaches a conscious perception of pain. Though the fetus develops the anatomy to respond to pain during the latter part of pregnancy, and can even make facial expressions of pain and/or distress, there is no correlation with the fetus’s actual comfort level. The placental sedation of the fetus means that it has no memory or “experiences” and therefore is unable to experience pain in the conscious way that adults and children understand. Further research may someday uncover more information on this complex and controversial question. 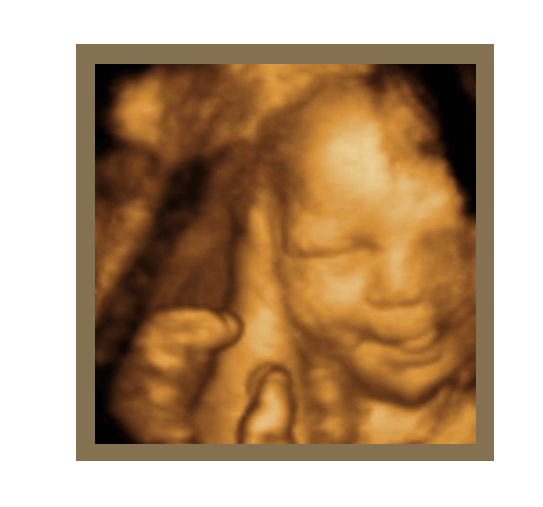 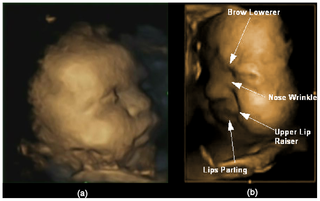 Pain/Distress Fetal Expression from Facial Expression Study
Read the study of fetal expression of pain and distress at http://www.plosone.org/article/info%3Adoi%2F10.1371%2Fjournal.pone.0065530.

Hugo Lagercrantz and Jean-Pierre Changeux.(2009). The Emergence of Human Consciousness: From Fetal to Neonatal Life. Retrieved March 16, 2014 from http://www.nature.com/pr/journal/v65/n3/full/pr200950a.html#bib16

The Adorable, Rewarding, and Sometimes Difficult Task of Birthing Babies

A common misconception is that the only job of a midwife is to deliver babies. In reality, the duties of a midwife begin long before the baby is born. A midwife can screen for diseases, prescribe certain
medications, help the mother stay healthy during pregnancy, monitor the baby's growth before and after
birth, provide emotional support, discuss care options and breastfeeding, support the mother and
her child after birth, and provide many more services in addition to the delivering the baby. As a
midwife, upcoming MSS speaker Sheri Matteo is responsible for the health and wellbeing of a woman
and her baby for the entire length of the pregnancy and beyond. The video below shows the benefits of
midwifery for women.

Midwifery Care: What's in it for women?

Matteo explained that midwifery in the U.S. has undergone many changes throughout history.
"Before the early 20th century, most babies in the US were delivered by midwives at home. Then
medicine, mostly male doctors, brought birth into hospitals and birth became a medical condition.
Women were put to sleep and babies were delivered with forceps. Moms were encouraged to bottle
feed. Midwifery pretty much vanished. In the 1970’s, with the rise of feminism and the “natural birth”
movement, midwifery as a profession started to grow again. Unlike many other industrialized countries
with better childbirth statistics where midwifery care is the norm, midwifery in the US has stayed on
the fringe and been seen as an “alternative” birth option. In the 15 years that I have been practicing,
I have seen many midwifery services grow and disband based on whatever economic issue was driving
healthcare at that time. Healthcare in the US is still largely driven by economics and legislation, but
midwives and other “mid levels” or “allied health professionals” are rising in use and stature. We
have rigorous education and certification maintenance programs and are fully integrated into healthcare
teams with nursing, case managers and social workers, as well as doctors. The profession is growing in
numbers and strength and our good outcomes are more commonly recognized by clients and medicine
professionals." According to Time magazine, approximately 8% of babies born in the U.S. - a record
high - and about 24% of babies in New Mexico were delivered by midwives in 2009. While delivery in
the U.S. usually takes place in a hospital in the presence of obstetricians, more and more women are
turning to midwives. 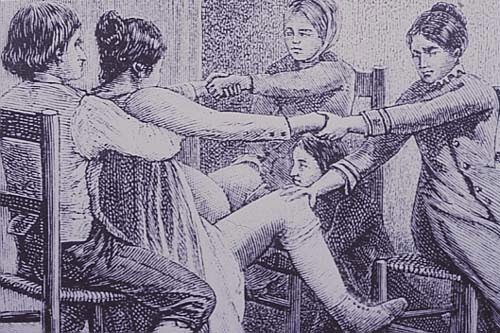 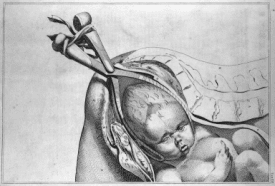 Read the rest of the interview with Sheri Matteo for a sneak peek preview of her upcoming MSS
presentation "Birthing Babies: What it Takes to be a Nurse Midwife". 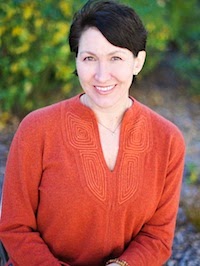 How did you decide to become a midwife?
I was premed in college and always thought I wanted to be an obstetrician. I was also a singer and performed in HS and college plays. I spent my junior year abroad studying acting in London and when I returned I realized I no longer wanted to go to med school. I received my BA in Theatre Arts at Brown University. I worked as an actress in NYC, off-Broadway and as a member of a theatre company. Working on a play with an older actress, I discovered her daughter was a midwife. I didn’t even know midwifery was a profession at that time! Shortly after, I met a woman who was an obstetrician. I was really inspired hearing about her work. She invited me to “take call” with her one night at the hospital. I saw a birth and I was hooked! Midwifery appealed to me more than medicine because of its emphasis on childbirth as a natural part of life, not a medical condition that needs to be “treated”.

How does one become a midwife? What sort of training or education is necessary?
There are many different kinds of midwives in the US and several different ways to become one. There are “lay” midwives who receive traditional training as an apprentice of another lay midwife. These midwives are sometimes state licensed and sometimes not. They are not eligible to work in hospitals so they only do home birth.  To be a Certified Nurse Midwife, I had to enroll in nursing school with the plan to continue onto graduate school. I went to Columbia University School of Nursing in NYC. They have a special nursing program for people who already have a baccalaureate. Instead of four years, I earned my BSN (Bachelors of Science in Nursing) in one and a half years. I continued on to complete my Masters in Nursing (MSN) in another one and a half years, for a total of three straight years and two degrees.

What are the responsibilities of a midwife? What is a typical day?
Certified Nurse Midwives can perform nearly all aspects of women’s health primary care. We screen for diseases, including cervical cancer, breast cancer and STDs. We can prescribe medicine including birth control and antibiotics. We perform prenatal care, making sure moms stay healthy in pregnancy and their babies are growing well.  We can deliver babies in the hospital, in birth centers, or at home. We support women with breastfeeding and take care of them postpartum. We do a lot of client teaching about their health, bodies, and care and treatment options. Though we do not perform surgery like c/sections, we are hands-on surgical assistants. A typical day involves either working at the clinic seeing prenatal patients (between 12-20 in 8 hours) or working in the hospital supporting moms in labor and delivering babies. Because I am the Director of my group of 12 midwives, I also have office work and a lot of meetings to attend. I work on marketing my group’s services, hospital quality and safety and employee satisfaction and performance. 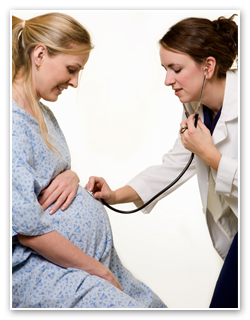 What is the most exciting, rewarding, or difficult aspect of being a midwife?
Watching new families grow! Helping women be and stay healthy. Meeting all kinds of people from all different cultures. Working with women and empowering them to believe in their natural ability to birth and mother.

What advice do you have for young people aspiring to be in a healthcare profession?
It is very hard work but also very rewarding. Never forget to treat all people with dignity and respect. 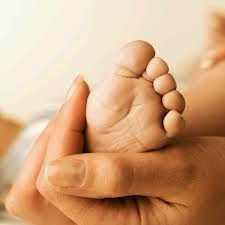