How to Bring Solar Energy to Seven Billion People 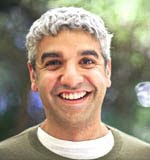 
Dr. Wadia is a pioneer in bringing a multidisciplinary approach to solving the complicated issue of renewable energy. Join him in a lively discussion on the promise -and the pitfalls - of solar energy. Download the flyer here.


In the city of San Rafael, the only way solar energy can be cost-effective is if the local government provides generous subsidies. That's true just about everywhere in the world. But what if there were a photovoltaic technology that was so cheap and so easy to install that even the poorest and most remote villages of the world could gain access to electricity? In this presentation, learn about discoveries of new materials that can make solar energy a reality for billions.

By exploiting the powers of nanotechnology and taking advantage of non-toxic, Earth-abundant materials, Cyrus Wadia has fabricated new solar cell devices that have the potential to be several orders of magnitude less expensive than conventional solar cells. And by mastering the chemistry of these materials - and the economics of solar energy - he envisions bringing electricity to the 1.2 billion people now living without it.

Dr. Wadia holds an MS in Chemical Engineering from MIT and a PhD in Energy Resources from UC-Berkeley. He is currently a postdoctoral fellow at the Lawrence Livermore Laboratory in Berkeley. Dr. Wadia spent six years in the high tech industry, has specialized in launching new technologies to market and has completed several successful new product introductions. Presently, Cyrus continues his work helping companies take technology to market as part of an independent consulting practice he began in 2001.