Don’t Take Your Breath Away: Lung Diseases and What Causes Them

The lungs are one the most important organs in the human body, so keeping them healthy should be a priority. Unfortunately, lung disease a leading cause of death in the United States, kills roughly four million people every year. Serious lung diseases might seem unpreventable, but in actuality, most are indeed preventable. 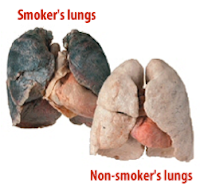 The most common cause of lung disease is smoking, with many deaths also resulting from secondhand smoke. When inhaled, tobacco smoke travels from the mouth through the upper airway and into the alveoli. As the smoke moves deeper into the body it is absorbed and particles are left behind in the airways. These particles contain carcinogens (cancer causing agents) and toxins, which put people at risk for disease when present in any part of the respiratory system.

Lung diseases resulting from smoking, such as lung cancer, are the leading causes of preventable deaths in the United States. This means that the extremely high numbers of lung disease deaths could be cut down immensely if simple actions are taken to prevent them. A study published by the New England Journal of Medicine showed that smoking took off approximately ten years of an average person’s life. But the study didn't consist entirely of  negative outcomes, it also found that if a person stops smoking before the age of 35 they can gain most of that decade back onto their life. But why risk it? Don’t put a vital organ at such a high risk!
More than just tobacco smoke gets trapped in the lungs. Other irritants are ingested in our daily lives. One example is particulate matter which is particles made from a wide variety of chemicals and dirt that come in many shapes and sizes. The particles can be so small that they get deep into the respiratory system and cause lung diseases and other health problems (EPA).
Another irritant to the lungs is the increase in pollen and molds, both of which negatively impact the lung disease asthma. When people with asthma inhale pollen and molds, they can have an allergic reaction which results in the airways becoming narrower, thus making breathing difficult (European Respiratory Review). 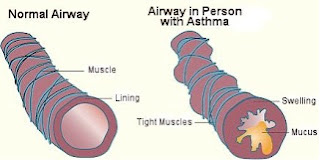 Similar to pollen and mold, when inhaled ground level ozone can make breathing challenging and worsen lung diseases. Ground level ozone is created by a chemical reaction between volatile organic compounds and oxides of nitrogen in sunlight. Emissions of these substances mostly come from industrial facilities (EPA).
It is easier to stop smoking than it is to alter the climate. Cutting out cigarettes can add years onto a person’s life and prevent the pain and expense that comes from diseases such as lung cancer.
Environmental factors that contribute to lung diseases can seem more uncontrollable than they actually are. With some simple steps a person can lessen the effects of lung diseases. These include cutting back outdoor activity during high pollen seasons (particularly important for people with asthma), staying away from urban areas as much as possible, and wearing dust masks if needed. It is never too early to take care of your lungs, take the needed precautions to keep them healthy.