What Makes a Cancer Cell

Cancer is most commonly treated through radiation, surgery, and chemotherapy.
(source)

While it could be considered cliché to compare cancer cells to supervillains, the similarities are undeniable. Supervillains are cunning, deeply rooted within their far-reaching schemes, and fearsome to the extreme. Cancer cells are just as sly, difficult to remove from the human body and terrifying to the afflicted and their loved ones. It's not hard to visualize cancer cells as the shady criminal syndicate of the human body; their reach extends to the lungs, bones, tissue and bloodstream, and their tactics are ruthless. Make no mistake—cancer cells have long been antagonists to the scientists fighting for a cure and the patients fighting for their life.
But when it comes down to the science of it, cancer cells differ from many classic villains in that they aren't innately evil. Rather, cancer cells and their dangerous properties originate from chance mutations during the division of normal cells. Mutations explain a lot of strange phenomena, from unexpected eye colors to increased resistance to diseases. These unexpected changes in gene sequences can be harmless, or even beneficial. However, they have an equal chance of damaging DNA, mutating it in such a way that the cell distorts into fast-splicing cancer cells.
Usually, mitosis—the process in which a cell divides—takes precautions against such mutations. "Checkpoints" during a cell’s growth period scan for identity-changing DNA mishaps, ensuring things are running as expected. If something is wrong, the cell will stop growing; if the damage to the DNA can’t be repaired, the cell will kill itself in a process called apoptosis. Through such self-sacrificing vigilance, cells that are mutated beyond repair never get the chance to multiply into a runaway number of damaged cells. But sometimes cell mutations go undetected, due to the sheer number of cells within the human body, with its trillions of constantly dividing cells, each with their own double-helix sequences and enzyme and lysosomes. In such a rush, a handful of mutations can slip by even the strict quality standards cells hold to themselves. Many of these mutations go undetected because they're harmless to the identity of that cell—but some aren't so benign.

When a cell with damaged DNA successfully slips by and divides, it creates the first two in a series of cells that will rapidly divide and spread incorrect DNA, beginning the first rapidfire stages of cancer. The speed of growth and division of cancer cells is unmatched, and unyielding; a cancer cell's daunting ability to keep multiplying without ever dying, as normal cells do, is often referred to as 'immortality'. This trait is due to two substances within the cell in particular: telomere and telomerase.
Telomere is a repeating DNA sequence that essentially acts as a cap for the chromosome it's on. The sequence acts as a buffer between valuable DNA sequences within the chromosome and the often messy process of dividing a cell. Without the telomere, the ends of the chromosome would lose important base pairs much like a rope fraying at the ends. The more a cell divides, the more telomere is lost in protecting the chromosome. Once all of the telomere is gone, the chromosome reaches “critical length” and no longer replicates. When this happens, the cell doesn’t divide and dies through apoptosis. The erosion of telomere thus measures the age of a cell, with long telomere sequences indicating young cells and short sequences indicating old ones. 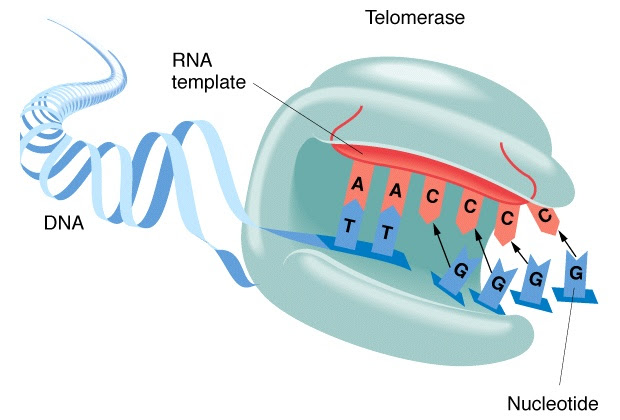 The repeating TTGGGG sequence is telomere; the enzyme and RNA template belong to telomerase, which rebuilds worn-down telomere.
(source)

To restore and keep the cycle of cells replicating in our body, telomerase is needed to extend the eroding telomeres. Telomerase is an enzyme made of proteins and RNA. As an enzyme, telomerase enables certain reactions that couldn’t happen without it—in this case, rebuilding and elongating telomeres to a longer sequence again. Telomerase is sparingly used in somatic, or body, cells, which comprise most of the human body. As a result, humans age without much interference from telomerase.
While telomerase is rarely active in normal body cells, the enzyme becomes ten to twenty times more active in cancer cells. The abundance of telomerase gives cancer cells an endless supply of telomere, and with it, the ability to multiply indefinitely.
In addition to 'immortality,' cancer cells have several additional unique properties that explain why finding a cure is proving so difficult. In addition to fast replication, cancer cells don’t undergo apoptosis easily; high levels of survivin, a protein, inhibits the usual method of cell death. Cancer cells need neither the physical space nor the same amount of nourishing chemicals, known as growth factors, that normal cells need. Instead, they pile freely on top of each other, and remain undeterred by a diet on growth factors. The clusters cancer cells often find themselves in form the lumps within the breasts and testes that doctors and outreach campaigns warn about. Despite their ability to clump, cancer cells have unfortunately high mobility, too. While normal cells anchor themselves onto neighboring cells, cancer cells can break away and travel through the body, infecting other organs. Their ability to invade and infect other areas is made possible through the ability to break through the lamina. The lamina is a noncellular shield that protects the tissues, organs and surfaces within the human body, deflecting normal cells with ease. Cancer cells don’t have the same limitation, and spread to different organs with relative ease.
With its unique properties, cancer remains frustratingly difficult to cure. Treating cancer needs to somehow overcome the mobility and speed of replication cancer cells exhibit. Current treatments for cancer actually do better than that—the chemotherapy method of treatment uses the cancer cells’ speedy multiplication against it. Chemotherapy sends chemicals throughout the body that kill fast-replicating cells. Cancer cells are efficiently targeted and wiped out through this method, being some of the fasted replicating cells in the body.
However, chemotherapy has serious faults in its accuracy; by targeting fast-replicating cells, chemotherapy hits hair and blood cells particularly hard. A broad swath of helpful cells get caught in the crossfire between chemotherapy and the cancer cells it's meant to target. As a treatment for cancer, chemotherapy can cause hair loss, amongst other more painful side-effects.

Chemotherapy affects the fast-growing hair cells as well, which is why cancer patients' hair often falls out.
(source)

Other treatments are available, when cancer cells are concentrated in specific parts of the body. Radiation focuses on a single area, maybe one organ, to destroy cancer cells. When cancer cells are concentrated in a single area, forming a tumor, surgery can excise the infected part. Sometimes, a mixture of the three treatments are required to treat a patient.
There is still no way to accurately target and eradicate cancer cells without collateral damage. For that reason, and for the growing number people with breast cancer, leukemia, and other forms of cancer, research for better treatment and ultimately a cure is incredibly important. Cancer is internal, deadly in its silent machinations and intimidating with its arsenal of lethal properties. It's up to the bright minds and generous hearts of every scientist, doctor, donor and activist to combat, quite literally, the enemy within.

Why do Cancer Cells Grow Forever and Can we Stop Them? Check out the teaser vid!

Why do Cancer Cells Grow Forever and Can we Stop Them? from Marin Science Seminar on Vimeo.
April 17th, 2013
Unlike normal cells, cancer cells can keep proliferating forever. This "immortality" allows cancer to spread through the body, causing destruction and often death. In this seminar, Dr. Stohr will discuss how cancer cells become immortal and how we might be able to treat cancer by targeting their immortality.

Brad Stohr MD/PhD is an Assistant Professor in the Department of Pathology at UCSF. His laboratory studies telomeres and telomerase in human cancer. In addition, he serves as an attending physician on the autopsy service.
By MSS at April 14, 2013 No comments: