The Physics of the Perfect Paper Airplane

The Physics of the Perfect Paper Airplane

Paper airplanes have become part of an important movement in the 21st century. It's called "making". Some people want to couch the movement as a rejection of television, video games, and mobile devices. That's upside down. Look at Makers. They don't reject anything. They consume all of that and then start using it for their own purposes. They are up to their elbows in the technology and loving it. Paper airplanes have the scientific method built in. They beg you to experiment. The hope of the world is in the hands of scientists. We need all of them we can get. We have no spare brains on the planet. Join us to learn about and experiment with the physics of the perfect paper airplane. 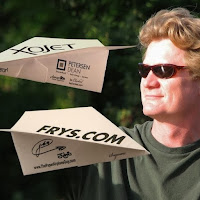 John Collins is the Guinness World Record holder for paper airplane distance. His love of paper airplanes has taken him around the globe. He has been invited to fly planes on four continents, and for some of the biggest companies in the world. His corporate clients have included Google Zeitgeist, Intuit, and Genentech, while his educational clients include Stanford and Rice universities, Carnegie Mellon, the Exploratorium, Maker Faire, and well as institutions around the world. John has appeared on all the major U.S. news television stations, as well as on Conan, science programs, and in numerous print media.

Explore science and technology, meet scientists and medical professionals, gain experience for your resume and college applications, develop a portfolio!


MSS interns attend and assist with a  6 science seminars per semester, during which they meet the speakers and assist with various logistical duties. Sessions take place on Wednesday evenings at Terra Linda High School, Room 207, during the school year. Interns arrive evening of a session at 7 pm and are free to leave once breakdown is completed (between 8:30 and 9 pm).
Interns also assist in researching and creating materials about event topics, creating and distributing outreach materials, social networking and online development of Marin Science Seminar’s mission to attract more students to the fields of science, technology and math. Other than attending MSS sessions, duties will depend on student interests and background. Training is provided for some intern tasks.

Below is a comparison of the internships currently being offered.