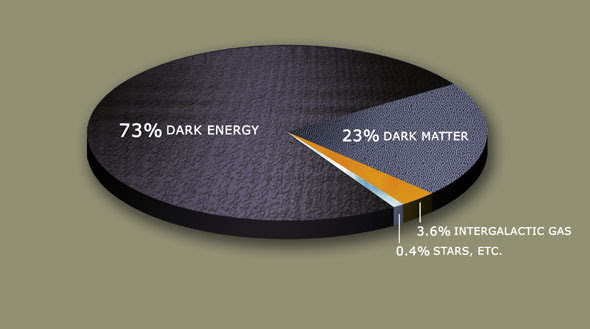 (source)
A pie graph of the universe's composition.

When most people think of outer space, they don’t usually imagine space.

The first thing that comes to mind are stars. Tiny white pinpricks of light in the sky that, in reality, are blazing spitfires of roiling gases. We envision bands of them, flung out into the inky blackness, coiled tight into galaxies or let loose in vibrant splashes of nebulae.
Then people may think of comets, bulky intergalactic travelers remembered by their brilliant icy trail. Perhaps the asteroid comes to mind, one amongst millions drifting lethargically in the thick belt that separates the inner planets of our solar system from the outer. We could imagine planets and constellations, nebulae and supernovae, quasars and pulsars!

Yet the yawning black stretches of nothingness between these extraterrestrials bodies remain overlooked.

Of course, ‘nothingness’ isn’t quite the correct term. What really fills the blanks between the occasional blimps of planets, galaxies and star clusters is a combination of dark energy and dark matter.

Dark energy makes up approximately 70% of the universe. Dark matter takes up another 25%. That only leaves around 5% for the stars, comets, planets, continents, cities and people that seems to encompass us one hundred percent of the time.

Matter composed of protons, neutrons, and electrons—in other words, everything we perceive on a daily basis—is known as baryonic matter. For hundreds of years, humans have studied the composition of the Earth, discovering elements upon elements that steadily defogged the mystery of substance. It’s bewildering that only five percent of the universe could be so densely packed with different elements, while the other ninety-five percent remains so large and undiscovered.
When gravitational effects in space didn’t match up with the amount of visible matter, scientists began hypothesizing the existence of a ‘missing mass.’ A recent discovery that the universe’s rate of expansion is accelerating instead of slowing spurred the idea of dark energy, some sort of invisible, unidentified energy that helps propel the expansion of space. Likewise, strange gravitational incidences and the fact that the visible matter of a galaxy often doesn’t match the amount of matter detected suggested the presence of unidentified matter.

If dark matter does exist, as studies suggest, then what is it made of? One of the leading theories today is the existence of Weakly Interacting Massive Particles, aptly abbreviated WIMPs.
Before delving into what WIMPs are, it’s pertinent to know what ‘weakly interacting’ means. Weak force is one of the four forces of the universe: gravity, electromagnetic, strong nuclear, and weak nuclear. Weakly-interacting particles have been observed for a while, for example, images of neutrinos. True to their name, weak particles interact so little with other substances that they can pass through incredible amounts of matter without collision. This detachment makes them difficult to detect in comparison to the constantly colliding protons, neutrons, and electrons of baryonic matter. 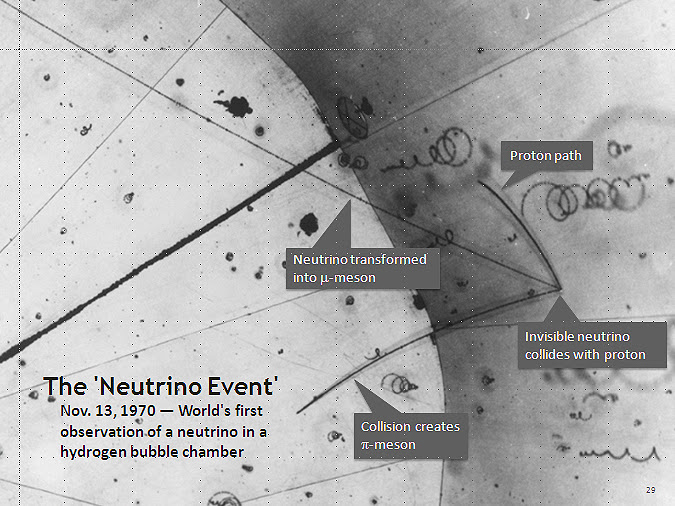 (source)
A neutrino is a type of weakly interacting particle.

Immediately after the Big Bang, the incredible energy and heat released allowed for the creation and destruction of particles. After the universe cooled, settled, and stopped producing more particles, most of the particles decayed and disappeared. However, weak particles can’t decay entirely. These remnants of particles, as old as the creation of the universe, hypothetically linger and affect matter According to scientists, the existence of a stable, weakly-interacting particle around 100 times the mass of a proton would fit the bill for the amount of dark matter measured.

Though dark matter and WIMPs are compelling, fairly supported hypotheses, they are still, to some extent, hypotheses.WIMPs could be floating through space right now—or another theory, the axioms, make up dark matter instead. Even broader, dark matter could exist—or the mechanics of gravity need to be reexamined.

Scientists are searching for confirmation now, in the form of evidence. CDMS, or the Cryogenic Dark Matter Search, is an experiment taking place in Soudan, Minnesota. Using Z-Sensitive Ionization and Phonon (ZIP) detectors, placed underground to minimize the amount of disturbances, the detectors are attempting to pick up nuclear recoils from WIMPs. Though hardly ever colliding with other particles, WIMPs still do crash into other particles. When one does, CDMS is hoping to pick up on it.

Join the Marin Science Seminar on Wednesday, October 24. Guest speaker Dr. Nader Mirabolfathi, member of the CDMS research team at UC Berkeley, will speak in depth about dark matter and WIMPs, including how they fit into the puzzle of space, and how the CDMS experiment is attempting to uncover them.

The Science Right in Your Bloodstream

There are a lot of words that begin with the prefix ‘bio-.’

Biology, for instance, and then biochemistry, biotechnology, bionics, biopharmaceutical... the list goes on and on, advancing further afield the deep, often obscure world of biological sciences.

(source)
pH is one of many properties used to analyze chemicals in body fluids.

And, why shouldn’t it? “Bio” as a prefix means ‘life’, the study of which starts at the very core of our existence. We have been fascinated with everything to do about life: plants, animals, people, and the chemical breakdown of them all. Food chains, weather, evolution, natural selection, and how they all shaped the world we live in today. There’s a lot of “bio” in this world, and a lot of different ways to study it! Some of them we can recognize right off the bat, like biomedical, or zoology. Other fields are a bit more esoteric.

By parsing the word into two bits, ‘bio’ and ‘analytics,’ it seems bioanalytics is the analysis of life. That’s true, to some extent, but it hardly sheds light on the depths of this exciting field.

On television, blood is tested for deadly toxins. Before games, athletes are tested for performance-enhancing drugs. The measurement of these xenobiotics, or external/unusual compounds, falls under bioanalysis.

Being able to analyze the amount of an active drug, and what it does once within the body, is hugely important to the development of pharmaceuticals. Dosage requirements and limitations take cues from what levels of drug concentration are safe. How often a person can take medication is also dependent on how long a drug stays in the bloodstream. Overdose is a serious threat that can be avoided by analyzing xenobiotics within the body.
Bioanalysis also appears in tests for illicit drug use, forensic science, and anti-doping testing for sports. It presides over the detection of external substances in the body, and how the drug is affected and affecting the body.

(source)
Some bioanalytic methods, and fields that use bioanalysis.

As technology advances, so does the development of medicine. The ability to detect and quantify newer, more potent, and thus less concentrated amounts of drugs, has spurred the improvement of bioanalytical technology as well. For example, medicine has progressed from smaller molecules to large chains of biomolecules, a change that demands adaption in the quantifying process as well. As equipment becomes more precise, so does knowledge of drugs, and prevention of their potentially dangerous usage.

Every advance in medicine comes with the keen reminder that human bodies are comprised of complex, often fragile systems--immune, cardiovascular, respiratory, etcetera. Medicine has done leaps and bounds for the lifespans of entire generations, providing respite from diseases and illnesses that plagued our ancestors. The balance between a drug’s potency and the body’s ability to withstand its foreign influence is crucial to every individual’s well-being. Bioanalytics helps shed light on that balance.

Join the Marin Science Seminar and Dr. Erik Foehr in exploring this very important aspect of drug development and forensic investigation on Wednesday, October 10. Dr. Foehr, an expert on bioanalysis, will delve deeper into the topic of bioanalysis and its many uses, including measurement techniques, immunogenicity risk assessment, and drug development.