Math in the Movies

On April 4th, Tony DeRose Ph.D. came to the Marin Science Seminar to discuss the many applications of mathematics at Pixar studios.  As a high school student, it can seem like hours of abstract math each week is a strange use of time, but calculus, geometry and other advanced mathematics are used on a daily basis at Pixar to make the incredible animations we know and love.

The process of making an animated film involves many steps with fine tuning at each to create the incredible worlds we see on the screen.  First, the story is drawn by hand into a "storyreel".  For each character, sketches of the character's main facial expressions are made to understand the character's personality.  The characters and sets are then modeled from the sketches on computers.  There are controls for the movement of different body parts of each character.  To simulate face movement, there are over 300 controls for the face movements of each character, each for a specific part of the face.  Algorithms are then applied to the scenes to simulate gravity and other movements not directly related to character movement. 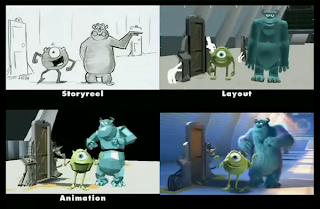 In the animation stage of the process, flat polygons are used to represent curved surfaces.  Dr. DeRose showed a program in his presentation that allows polygons to be manipulated into a curved surface using midpoints and geometry.  Lighting in the movies involves many complex integral algorithms used to calculate how the light scatters across the various surfaces on the screen.

Dr. DeRose concluded his talk by discussing the Young Maker's Program: (http://www.youngmakers.org/) a program which allows children and teens to develop their own building projects and make them.  This program promotes math and science education and allows kids to build awesome things to share at the Maker Faire each year with other builders.