The Large Hadron Collider:
What it is and what we have Learned from it so far

Marin Science Seminar Presentation: "The Large Hadron Collider: What it is and what we have Learned from it so far" Watch the protons fly as Dr. Heinemann returns to tell us the latest on CERN's Large Hadron Collider and the ATLAS project. Download the flyer here, (November 16, 2011, 7:30-8:30 pm, Terra Linda HS, Room 207, San Rafael, CA)

"The field of "particle physics" tries to understand the physics of the most fundamental building blocks of matter. How many such building blocks are there? How do they relate to each other? Why are they there? Currently we do not have a good theory why we have any mass at all, even though of course we know that all matter has a mass. There are, however, many theories about why this might be and the goal of my experiment is to prove or disprove them, or to maybe find completely unexpected phenomena that will then need to be explained. One exciting possibility is that we find extra dimensions of space that could even result in the production of mini-blackholes. My experiment is called ATLAS and is situated at the "Large Hadron Collider" (abbreviated as LHC) that is located in Switzerland. There are more than 2000 physicists on my experiment, and many engineers and technicians: all of them collaborate with each other to answer some of the most basic and fundamental questions of Science today. In my talk I will describe how this experiment works and what we hope to discover there."


Dr. Heinemann is Associate Professor of Physics at UC-Berkeley.
By MSS at November 09, 2011 No comments:

Dr. Schneider will overview experiments in his laboratory that have revealed molecular and cellular processes involved in facial patterning. He will describe how his studies to understand the basis for skull shape in breeds of dogs led him to create a cell transplant system whereby duck embryos develop with quail beaks. He will bring an assortment of skulls. Get the flyer here. (October, 2009; October 19, 2011)

Dr. Schneider graduated from Hampshire College in 1991. As an undergraduate, he published his first paper, which was on skull evolution in domestic dogs, following an internship at the Smithsonian Institution in Washington, DC. He received his Master's Degree in 1994 and his PhD in 1998 from Duke University. He also studied embryology at the Marine Biological Laboratory in Woods Hole, MA, and at the Cold Spring Harbor Laboratory on Long Island, NY. For his Postdoctoral work at the UCSF, Dr. Schenider investigated molecular mechanisms that pattern the craniofacial skeleton. In 2001, he joined the faculty of the Department of Orthopaedic Surgery at UCSF.
By MSS at October 12, 2011 No comments:


“Homeless Nemo: What Does the Future Hold for Coral Reef Communities?”

Coral reefs are undoubtedly among the most threatened ecosystems in the world. Studies predict that without increased conservation and restoration efforts a complete collapse is only a few decades away. This talk will focus on the current status of coral reefs around the world, including threats to them and the consequences of those threats. (4/30/08, 9/29/10, October 5, 2011) Get the flyer here.

Dr. Coelho holds degrees in Biology, Ecology and Zoology and she completed doctoral research while working as a visiting scientist at the National Museum of Natural History, Smithsonian Institution. After completing her doctorate she held research scientist positions at Columbia University. Dr. Coelho’s research focuses on the ecology and evolutionary biology of marine invertebrates including benthic community ecology, population biology, behavior, systematics of crustaceans, and coral reef ecology. She is currently Associate Professor of Biology at Dominican University.

What's in Our Genes?: How our genes make us who we are"

with Jane Gitschier, Ph.D. of UCSF's Institute of Human Genetics


Dr. Gitschier’s laboratory has broad interests in the field of human genetics, ranging from past work on the molecular genetics of hemophilia, through gene discovery for a variety of inherited disorders. Combined with discovery of genes in mouse mutants and the generation of mouse models for human disease, her research has led to a deeper understanding of heavy metal metabolism and has provided more accurate genetic diagnosis and prognosis for families. Currently her lab is engaged in two unusual projects. The first concerns understanding the genetic basis for absolute pitch perception, a rare cognitive trait in which the pitch of a tone or sound can be named without any reference tone. While she hypothesizes that AP has a large genetic component, exposure to music in early childhood is also key. A second project involves the use of DNA haplotypes to infer ancestry, an endeavor known as genetic genealogy.

Jane Gitschier joined the UCSF Faculty in 1985 following post-doctoral work at Genentech. She received her PhD from MIT in Biology in 1981. She was an HHMI Investigator and a Guggenheim Fellow. Her longstanding interest is in human genetics. She lives with her daughter Annie Steinberg and cat Pogo in San Francisco.
Visit the Event Page - RSVP on FaceBook - Like Us on FaceBook
By MSS at September 14, 2011 No comments:

“Life in the Slow Lane - Peristaltic Locomotion in Sea Cucumbers” How exactly do soft-bodied animals get around? This talk combines results from projects investigating locomotion in four species of sea cucumbers (Echinoderms). Professor Spain will talk about peristaltic locomotion being used to crawl and burrow into sand. She will also give an overview of results on the kinematics analysis of crawling across sand. These include variables like stride distance, stride length, and crawling velocity. Crawl on over and check it out! Download the flyer. (January 26, 2011)

Dr. Spain is Assistant Professor of Biology at Dominican University, San Rafael. She earned her B.S. in Biology Education from North Carolina Agricultural and Technical State University and her Ph.D. in Biology from the University of North Carolina at Chapel Hill. Currently, her research focuses on the functional morphology and locomotion of invertebrates 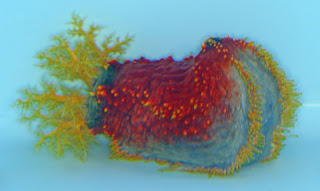