The Fascination Behind Ants

Did you know that ants are capable of carrying 50 times their body weight in their mouth? Or that ants are the original farmers? Or even that the total biomass of all of the ants on the planet is roughly equivalent to the biomass of all of the people on Earth? These are three of the many reasons why ants are so fascinating. The small insect that most of us view a pest is actually a intriguing specimen and worth the time and effort to research. 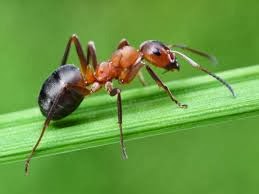 Marin Science Seminar returns in 2014 with a presentation titled "Ants: The Invisible Majority" with Dr. Brian Fisher. Dr. Fisher is a modern day explorer who journeys through remote tropic areas in search of ants. His research utilizes ants as a tool to discover and preserve plant and animal diversity in these places. Dr. Fisher has discovered over 1000 new species of ants including the jumping ants and Dracula ants. He has appeared in a number of BBC, Discover Channel, and National Geographic films and has been profiled in Newsweek and Discover magazine. When he is not working in the field with ants, Dr. Fisher lives in a tree house with the banana slugs. He is currently Chairman of Entomology at the California Academy of Sciences and adjunct professor of biology at UC Berkeley and San Francisco State University. In the video below, Dr. Fisher details why he believes ants are so cool.

The following interview shows his experiences with ants and his passion for his research.

How did you decide to become entomologist?

I actually thought I was going to be a botanist, but after a trip to Panama as a sophomore at the University of Iowa, I was struck by the ants’ diversity, abundance, and ecological role. Its not just their diversity that is fascinating. After all beetles are diverse - there are 40,000 leaf beetles - but they all just eat leaves. Ants, on the other hand, have evolved  the most diverse and surprising ways of making a living from growing fungus to tending to aphids. Also, because ants are social, there is a whole other dimension that is fascinating that is not even possible with solitary insects. After working on plants a bit that year in Panama and I dropped the "pl" and just worked on "ants".

Why did you choose to study ants specifically?

I remember I changed the day I discovered an orchid in the canopy in Panama.  This orchid had a specialized home for ants to live and produced nectar for the ants to eat. This was the first orchid to have such a relationship with ants. After researching the ants on this orchid, and learning how their trash pile in the orchid bulb helped feed the orchid, I was hooked on ants.

Where has your research taken you?

I have worked mostly in the tropics, especially South America, Africa, and Madagascar.  Ants are much more diverse in the tropics. Antarctica, the only continent named after ants, actually doesn't have any ants.

What is the most difficult aspect of your work?

To be a field-based explorer and a scientist requires you to juggle a lot - from fund raising and government permits to extreme field conditions to sitting endlessly looking through a microscope.

What is one of the most surprising or exciting thing you have discovered about ants?

In Madagascar, I have discovered over 800 new species of ants, including Dracula ants. These "primitive" ants feed off the blood of their own larvae. Why are we so interested in discovering life on Mars when right here on Earth, we know so little. We are also probably the last generation that will have a chance to explore much of this diversity before it goes extinct.


What information can people learn from ants?

Ants are social and, like humans, face many of the same problems such as communication, group problem solving, food transfer etc. By studying ants, we are learning how ants, after 150 million years of evolution, have solved these shared problems.  Some of these studies on group intelligence and neural networks are already making an impact in the field of artificial intelligence.

How do people react when you tell them about your work?

After I give a lecture, where I detail the wonder of the secret lives of ants, the first question I get is always, "How can I kill the ants in my kitchen?" My response?  I tell them to leave some cookie crumbs on the counter and watch the ants. It is a rare treat to watch these wonders right in your own home.

Be sure to check out the rest of the 10 Fascinating Facts About Ants here.

For more information, videos, and pictures about Dr. Fisher check out his page on the California Academy of Sciences website or his ant web site.